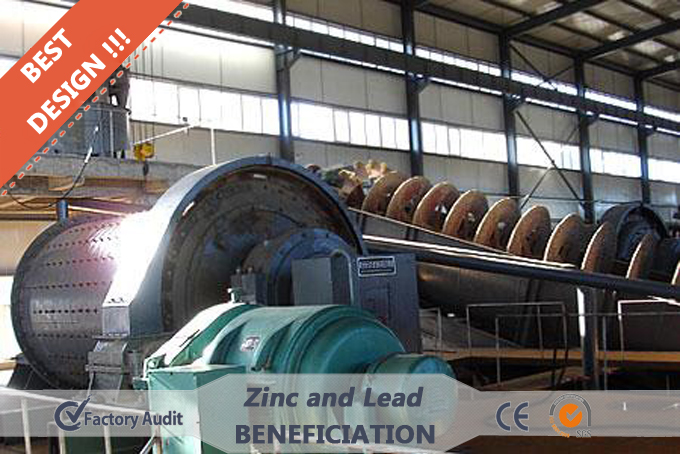 Lead and zinc ore are common symbiotic associated minerals, they often appear at the same time. Lead-zinc Ore is the main ore for refining lead and zinc metal. It is the main technical process to refine lead first and then zinc in the lead-zinc ore beneficiation.

Zinc and Lead Mineral process and concentrates by Flotation separation and recovery from ores containing galena (PbS) and sphalerite (ZnS) is well established and generally achieved quite effectively. Silver often provides highly significant economic value, if not the greatest value, with the silver most often associated with the galena mineralization which is fortuitous since smelters pay more for silver in lead vs. zinc concentrates. The non-values include iron sulphides such as pyrite and pyrrhotite that, while are often floatable, can be controlled. Siderite, an iron carbonate mineral, is often also associated in at least some minor quantity.

Marmatite ((Zn,Fe)S) is an iron-rich sphalerite which consequently results in lower zinc concentrate grades. Marmatite concentrates have a lower zinc level due to dilution from the iron minerals.

Lead flotation collectors and frother are conditioned before lead flotation which is conducted typically at near neutral to slightly elevated pH which can be increased in the cleaner circuit to ensure iron sulphide rejection. Sometimes cyanide, if can be used, is added to help depress iron sulphides. Because silver typically is mineralogically associated with galena, most of the silver values are carried with and report to the galena concentrate.

Optimum lead concentrate metallurgy and recoveries are usually achieved using a combination of a xanthate and dithiophosphates. If the galena surfaces are slightly oxidized (“tarnished”), including mercaptobenzothiazole (MBT) is often made part of the collector suite to maximize galena recoveries. Frothers used in galena flotation tend to be of the weaker type, such as MIBC, because galena is readily floatable and have high flotation kinetics. However, because of the high float kinetics and high galena mineral density, the mineral froth carrying capacity may necessitate use of a slightly stronger frother or a combination with a stronger frother component for achieving optimum metallurgical results.

While pyrite is fairly easy to depress with lime, pyrrhotite is more difficult to depress. An alternative to metabisulphide depression is to aerate the slurry which, if the pyrrhotite is reactive, can render this iron sulphide less floatable. In cases of greater iron sulphide depression challenges, the zinc concentrate can be cleaned by reverse flotation of the concentrate by first treating with SO2 to reduce pH to 5-5.5 and then heating the pulp to 60-70 degrees C. The gangue is floated with the sphalerite reporting tothe tails

please leave a message if you have any question :

Thank you for your interests in our company. You can contact our head-office directly, also you can feel free to submit your inquiry to us. Of course, phone is available and you can get help immediately.