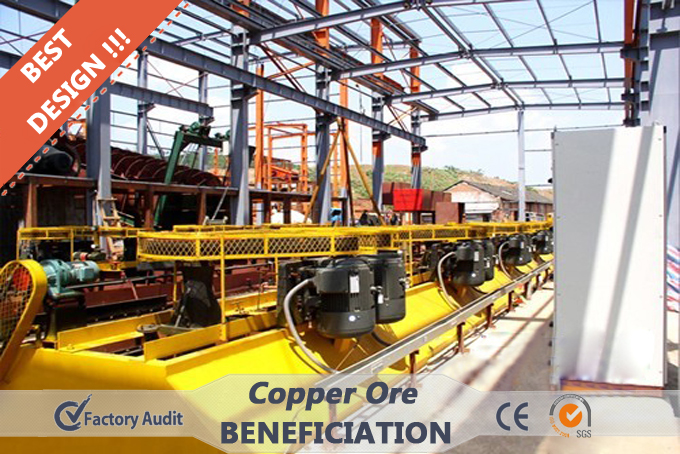 Brief Introduction of Copper Ore:
Copper ore is one of the basic chemical elements. In its nearly pure state, copper is a reddish-orange metal known for its high thermal and electrical conductivity. It is commonly used to produce a wide variety of products, including electrical wire, cooking pots and pans, pipes and tubes, automobile radiators, and many others. Copper is also used as a pigment and preservative for paper, paint, textiles, and wood. It is combined with zinc to produce brass and with tin to produce bronze.

The Process of Copper Beneficiation:
The process of extracting copper from copper ore varies according to the type of ore and the desired purity of the final product. Each process consists of several steps in which unwanted materials are physically or chemically removed, and the concentration of copper is progressively increased. Some of these steps are conducted at the mine site itself, while others may be conducted at separate facilities.
Here are the steps used to process the sulfide ores commonly found in the western United States.

Mining Steps of Copper Beneficiation:
1 Most sulfide ores are taken from huge open-pit mines by drilling and blasting with explosives. In this type of mining, the material located above the ore, called the overburden, is first removed to expose the buried ore deposit. This produces an open pit that may grow to be a mile or more across. A road to allow access for equipment spirals down the interior slopes of the pit.

2 The exposed ore is scooped up by large power shovels capable of loading 500-900 cubic feet (15-25 cubic meters) in a single bite. The ore is loaded into giant dump trucks, called haul trucks, and is transported up and out of the pit.

The copper ore usually contains a large amount of dirt, clay, and a variety of non-copper bearing minerals. The first step is to remove some of this waste material. This process is called concentrating and is usually done by the flotation method of copper beneficiation.
A cone crusher consists of an interior grinding cone that rotates on an eccentric vertical axis inside a fixed outer cone. As the ore is fed into the top of the crusher, it is squeezed between the two cones and broken into smaller pieces.

4 The crushed ore is then ground even smaller by a series of mills. First, it is mixed with water and placed in a rod mill, which consists of a large cylindrical container filled with numerous short lengths of steel rod. As the cylinder rotates on its horizontal axis, the steel rods tumble and break up the ore into pieces about 0.13 in (3 mm) in diameter. The mixture of ore and water is further broken up in two ball mills, which are like a rod mill except steel balls are used instead of rods. The slurry of finely ground ore that emerges from the final ball mill contains particles about 0.01 in (0.25 mm) in diameter.

5 The slurry is mixed with various chemical reagents, which coat the copper particles. A liquid, called a frother, is also added. Pine oil or long-chain alcohol are often used as frothers. This mixture is pumped into rectangular tanks, called flotation cells, where air is injected into the slurry through the bottom of the tanks. The chemical reagents make the copper particles cling to the bubbles as they rise to the surface. The frother forms a thick layer of bubbles, which overflows the tanks and is collected in troughs. The bubbles are allowed to condense and the water is drained off. The resulting mixture, called a copper concentrate, contains about 25-35% copper along with various sulfides of copper and iron, plus smaller concentrations of gold, silver, and other materials. The remaining materials in the tank are called the gangue or tailings. They are pumped into settling ponds and allowed to dry. Solution Email to [email protected]

please leave a message if you have any question :

Thank you for your interests in our company. You can contact our head-office directly, also you can feel free to submit your inquiry to us. Of course, phone is available and you can get help immediately.